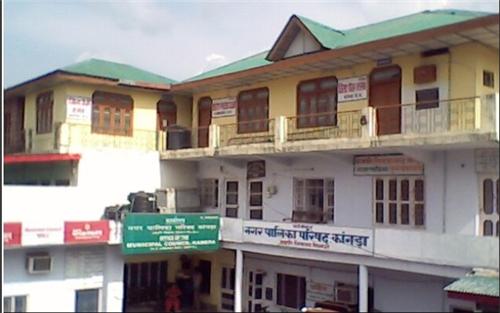 The Directorate of Urban Development

Although Kangra Municipal Council is an independent body elected by the citizens of the town, it has to work according to the rules enacted by the Directorate of Urban Development. The aforesaid body was established in 1985-86 by the government of Himachal Pradesh to direct, control and monitor activities of all local self governments under its jurisdiction. Accordingly, it monitors the administrative, legislative and development activities of Kangra Municipal Council from close quarters.

Function of the Kangra Municipal Council

According to the directives set by the Directorate of Urban Development, the responsibility assigned to the Kangra Municipal Council is manifold. For example, it has to construct, maintain, improve, repair and clean all public roads, buildings and parks. It also has to see that all roads under its jurisdiction are properly lighted. Moreover, it is also the responsibility of the Municipal Council to supply adequate drinking water to the citizens and build schools, dispensaries, hospitals etc for their benefit.

In order to discharge their duties, the Municipal Council in Kangra has divided the city into nine wards, each of which has a separate name. Following are the names and numbers of each ward; the phone numbers of the councilors of each ward have also been provided in the list:
The council is headed by a President, who is assisted by a Vice President. The current President is Smt Suman Verma. In case of emergency one may contact her at 94801-85782. One may also contact the office of the Municipal Council at 01892-265-035.

The Municipal Council of Kangra has taken out a charter defining its purpose and function. Under this charter the Council has declared that it will collect garbage from the public places everyday and remove carcasses within 12 hours. If that is not done, one may complain to the Council and action will be taken within 24 hours. In case of other complains, a minimum fee will be charged; but it will be attended to within two days.

Contrarily, births and deaths can be registered at the Municipal Council free of charge if it is done within 21 days. After that a nominal fees will have to be paid. However, to receive the birth or death certificate one will have to pay a nominal charge of Rs. 50 and Rs. 60 respectively.

The Charter also declares that all bills will be issued on monthly basis and one is expected to pay the same within 10 days. Moreover, in case the bill is paid within 10 day, one can expect to receive 20% rebate on the bill. Contrarily, if the bill is not paid within stipulated time, one has to pay a surcharge of 10%.

Taxes and other charges levied by the Municipal Council

Indeed, without the full cooperation of the people, no municipal council can discharge its full responsibility. It is expected that the people will pay their taxes and other dues in time. Following are the different charges levied by Municipal Corporation:

Assets belonging to the Municipal Council

It may be noted that the Municipal Council of Kangra does not levy any trade license fees. That is because the aim of the council is to create employment opportunity for the people here. Contrarily it depends more on other forms of taxes and rents. For example, the Council has a large number of properties from which it gets regular income. These properties include 86 shops, 42 sites, 6 rooms, 2 entire buildings, 1 hall and 16 iron khokhas.

Besides the above mentioned assets, the Council has number of removable and non-removable assets. For full information, you can either visit their website or approach the Executive Officer of Kangra Municipal Council under Right to Information Act.

Explore more about Administration in Kangra