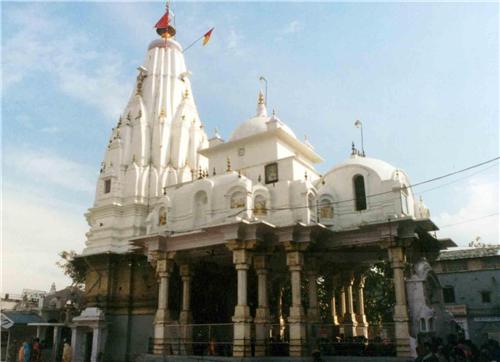 The Bajreshwari Devi Temple at Kangra is an ancient temple with many mythological stories woven around it. At one time, it was one of the richest temples in India. The main deity here is Mata Bajreshwari Devi. She is also known as Mata Brajeshwari, Vajrabai and Vajrayogini Devi.

The Mata Brajeshwari Devi Temple is one of the fifty-one Shakti Peethas located in different parts of India. It is said that Sati, the Divine Consort of Lord Shiva, gave up her body as she could not tolerate her husband being insulted by her own father, Daksha. When Shiva came to know of this, He picked up Sati’s body and began his Tandava dances. It was such a terrible dance that the gods and wrishis feared that the creation would soon be destroyed. To stop the Tandava, Vishnu cut up Sati’s body into fifty one pieces, each of which fell in different places. As Sati was the embodiment of Shakti or power, these fifty-one places began to be known as Shakti Peetha. Kangra is one such place.

It is said that Sati’s right breast fell at the very spot where the temple now stands. It is also believed that The Pandavas of Mahabharata fame were first to build the temple. They were instructed by the Mother Goddess to build a temple at this very spot when they were moving around in the guise of foresters after losing their kingdom in the game of dice.

Another mythological story associated with this temple is about demon Kalikala. It is said that, on the requests of the gods, Mother killed the demon at this very spot with the help of her Vajra and hence the name Mata Vajrabai and Mata Vajra Yogini Devi. Some also say that the body of demon king Jalndhara is buried at this spot. 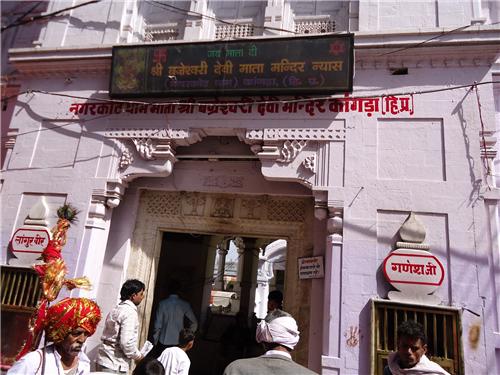 Bajreswahari Devi Temple is located in New Kangra. To reach the temple, one has first to take up Kangra-Shimla Road (NH 88). If you are driving towards the Old Kangra, you will find Kangra Main Market Road on your right. Behind the bustling market that sells everything from puja materials to mundane articles, is a road called Mandir Road. Mata Bajreshwari Devi Temple is located on this road.

Visitors coming by car must park their vehicle at the Central Parking Lot. Buses also ply through NH 88 and the bus stand is located at a distance of 2 Km from this temple. If the cobbled pathway meandering through bazaar makes you confused, all you need to say is ‘Mandir’ and waving hands will lead you to the right direction. Be prepared to negotiate many twists and turns; there will also be many steps and steep inclines. Soon you will hear the clanging bells of the temple beckoning you. 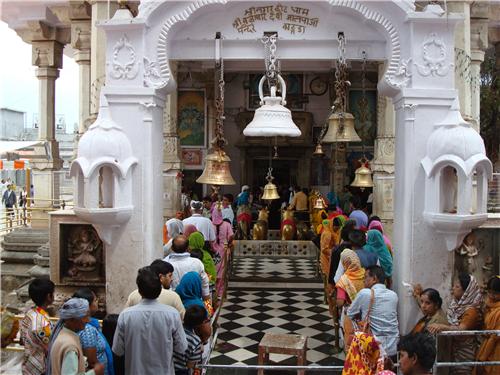 As you enter the temple complex, you will mesmerized by a magnificent temple. It is said that the temple can be seen from Gaggle Air Port Tower. To enter the inner sanctum, you will most probably have to stand in a long queue. In the inner sanctum, the deity is worshipped in the form of a Pindi. During Makar Sankranti, clarified butter or ghee is applied to the deity, which is then washed off with one hundred buckets of cold water. It is said that while fighting Mahishasura, the Mother got hurt and the wound was cured by applying ghee. This festival, which continues for a week, celebrates the incident.

In the inner sanctum, you will find the Mother decorated beautifully with flowers. Once you have offered your puja, you must pay a visit to the temple of Bhairava. It is believed, when Shiva began his Tandava dance he took up the form of Bhairava and hence Bhairava is the consort of Sati in these Shakti Peethas.

To absorb the vive, you must sit down in the marble courtyard and relax. There you will see pilgrims from far and near coming to pay their homage. Foreign tourists too come here to admire the architecture of the temple. 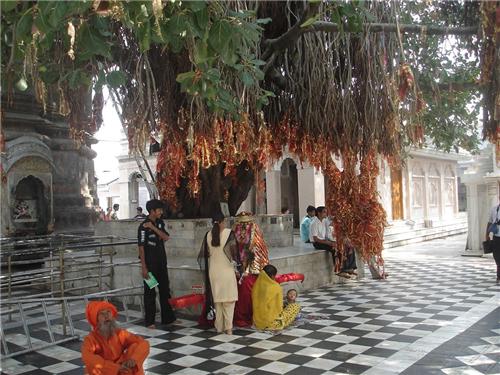 The temple as we see today was built in 1920. Constructed in Shikhara Style of architecture, it offers a magnificent example of stone carving.  At the doorway, one is greeted by two beautiful statues. The exteriors of the temple have idols of Durga (four-armed) seated on a lion. There are also idols of Vishnu in Vaikuntha form. The pillars, which too are marvelously carved, depict images of different Hindi Gods and Goddesses. Apart from the main temple housing Mata Bajreshwari Devi, the complex also has two smaller temples. One of them is dedicated to the Lord Bhairava and other to the Dhyanu Bhagat, a devotee of the Devi.

We do not exactly know when it was first built. Some folklore puts it to the Mahabharata period. However, it is known that the temple was ransacked and plundered by Mahmud of Ghazni in 1009 and so it must have been built much before that. Indeed, since its inception, the temple has been repeatedly ransacked. Ghazni not only plundered the temple, he turned it into a mosque and left a garrison here. Later the Kotach kings of Kangra regained position and after almost 35 years the temple was restored to its former glory.

Then again in 1360 Feroz Tughlq plundered and destroyed this temple. It was then rebuilt by Emperor Akbar and his dewan Todar Mal.  In 1905, a violent earthquake shook the whole of Kangra district and the temple of Mata Brajeshwari was destroyed completely at that time. This time it was rebuilt by Kangra Restoration Committee. Later the courtyard of the temple was laid with marble with the money sent by devotees from Amritsar. So we see that this temple of Mata Brajeshwari Devi is eternal.