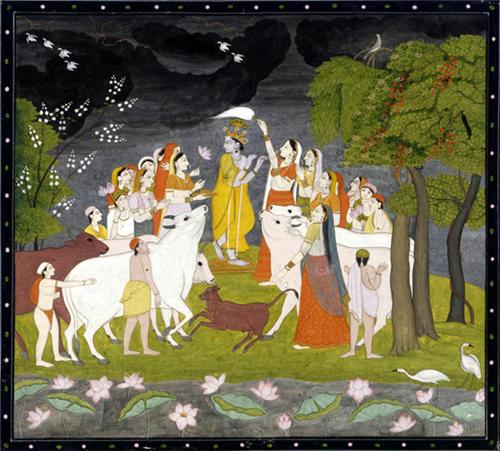 Kangra paintings are famous for their lyrical contents expressed in a delicate manner. However, those who are interested in history of art know that Kangra paintings are one of the branches of Pahari Style of painting, which flourished from 17th to 19th century BC over a wide region stretching from Jammu Kashmir to Almora. 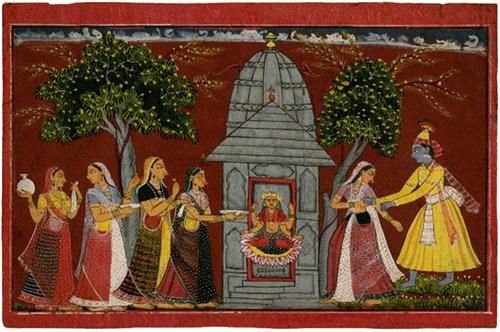 Many experts are of the opinion that Kangra paintings have their origin in Basholi style of art. Basholi, located on the right bank of River Ravi in the Kathua District of Jammu Kashmir, was a center of art and culture for a long period. This school of painting developed under the patronage of local kings and the pictures portrayed people with stylized faces and large intense eyes. The colors were always bold with brown, ochre yellow and green dominating the scheme. The jewelries were depicted by thick raised drops of white paints. Emeralds were represented by wings of the beetles.

However, the importance of Basholi paintings began to diminish by the middle of 18th century. Lack of royal patronage can be one reason for that. At the same time, a similar school of painting began to be evolved in Kangra under the patronage of Katoch kings. Very soon, this school of painting began to shadow other schools in the Himalayan region and Kangra Painting almost became synonymous with Pahari Painting. 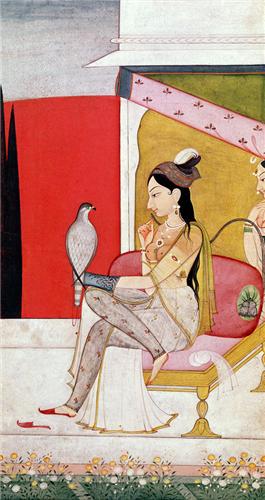 According to another school of thought Kashmiri painters trained in Mughal art came to settle in Guler near Kangra in the middle of 18th century. They mingled with the local artists trained in Basholi school of art and evolved a new art form, which we now call Guler Painting and this in turn evolved into Kangra Paintings.

Difference between the Basholi and Kangra School of Paintings

It is important to note that the Kangra paintings can no way be defined as folk art. Contrarily, it has developed under the patronage of kings and has a touch of aristocracy in them. The verdant greenery of these paintings is another of their important features. They not only feature trees, creepers and flowering plants, but also different shades of green have been used to differentiate various kinds of foliage. Moreover, the facial features are softer and more delicate in Kangra paintings.

To paint pictures, the artisans of Kangra extracted colors from plants and minerals. Consequently, they possessed enamel like luster. In the early phase, the subjects of the paintings were mostly natural sceneries like forests, glades and brooks.  Later the eternal love story of Radha, Krishna and the Gopis were also depicted through these paintings. Scenes from the great epic Ramayana was alsp depicted by the painters of Kangra. 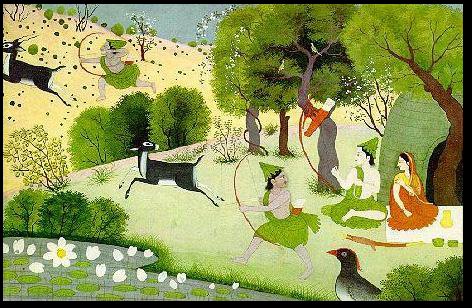 One more point to remember is that although Kangra is the center of this art form, over the years it spread to other areas such as Chamba, Nurpur, Bilaspur, Mandi, Suket, Arki, Kulu, Nakagarh etc.

It is to be noted that the Radha Krishna were always a favorite subject of Pahari paintings. They were also the theme of paintings even in the Basholi form of art. Geet Govinda by Joydeva and Bhagabat Purana are two important sources of subject in this style of painting. However, Raja Sansar Chand Katoch, under whose patronage the Kangra School of painting reached its zenith, was an ardent devotee of Radha-Krishna.  Therefore, the theme got more prominence during his reign. We find many pictures portraying the eternal love of Radha-Krishna or the eternal longing of Gopis for Lord Krishna. 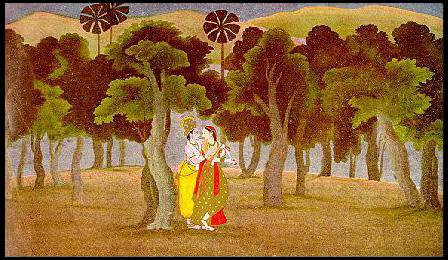 With time there is a rise and fall of every form of art. With the loss of royal patronage Kangra paintings too underwent a lean period. The good news is that the government as well as different NGOs is now trying to revive it and train budding artists in this form of art. If their endeavor is successful we may see a revival of those golden days.