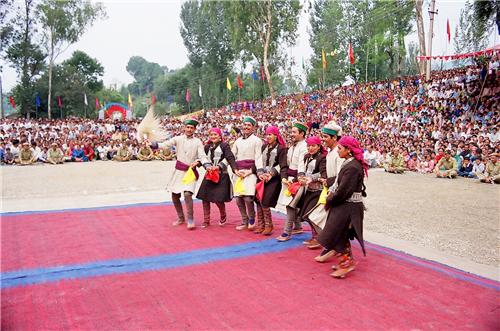 Like most hill stations, festivals are parts of life in Kangra. In olden days when communication was difficult and life was monotonous, these festivals helped to bring in cheer. Even today they have not losttheir relevance. The residents of Kangra celebrate all pan-India as well as local festivals with gusto. However, in this article we will try to discuss some of the unique festivals of this region.

Although Makar Sankranti is an all-India festival it is celebrated a little differently in Kangra. It is said that Mata Barjeshwari got herself hurt while fighting the great Demon Mahishashura. To cure herself she applied ghee or clarified butter on her wound and it soon healed. During the Makar Sankranti a big fair is held at the Brajeshwari temple for seven days and special puja is also offered to the deity. Butter sculptures, flower decorations are as much part of the festivals as are holy dips at the Ban Ganga. Bhajans or hymns to the deity too add to gaiety.

Shivaratri and Navaratri at Kangra

Shivaratri is another all-India festival celebrated little differently in Kangra. This festival is as much significant for the people here as for the temples of the town. While most keep fast throughout the day and offer their puja to Lord Shiva at night there is another unique aspect of it. Images of Lord Shiva and Mata Parbati are made either with clay or with cow dung. The idols are then worshiped with greatest devotion. Songs are also sung in praise of the lord Shiva and His Consort Mata Parbati. In all, Shivaratri is an example of a festival that combines devotion and piousness with gaiety.

Navaratri is also another important all-India festival celebrated with gaiety in Kangra. Out of the nine days, the Durga Ashtami holds special significance for the people here. On that day devotees go to offer puja at the local Durga Temple.

Chet, also known as Dholru, is an important festival for the people here. In Kangra, Hamirpur and Bilaspur, the festival takes place on the first day of the month of Chet. In Kangra, the festival is celebrated so as to drive away all that is bad and to usher in prosperity and happiness. Dholru, a special genre of songs, are sung on this occasion.

Unlike the above mentioned festival, the Spring Festival is typical festival of Kangra. It is generally celebrated in March/April, ten days prior to the Baisakhi or Biswa. Young unmarried girls make figurine of Lord Shiva and Mata Parvati ; they then worship them for ten consecutive days. They also put on their best dress and gather around a heap of grass. They then sing and dance around that heap adding gaiety to the occasion. On the Baishakhi day the figurines are immersed in a pond or a river.

Biswa or Baisakhi in Kangra

Biswa in Kangra is celebrated at the end of the Spring Festival. Generally it falls on 13th April. However, preparation for the festival starts much earlier. Houses are cleaned and where possible they are applied with fresh coat of paint. The pious also take a holy dip in Ban Ganga. Fairs are held on this occasion and residents take part in it with full gusto.

Haryali is held on the first day of Shravana (generally 16th July) in the honor of the Rain God. Ten days prior to this festival seeds of five to seven different kinds of grains are mixed together and sowed in a basket filled with earth. It is either done by the head of the household or by the family priest. On the day of the Haryali clay idols of Shiva and Parbati are married off because the devotees believe that it is Their union, which causes fertility to the land.

Sair and Nawala at Kangra

Sair is basically a festival of thanks giving and is held in September or October. A barber goes round with a fruit in a basket (galgal) and the residents bow to the fruit wishing for a rich harvest. Nawala is also a festival of thanksgiving, but it is mainly celebrated by individual Gaddi household of Kangra. This particular festival is dedicated to Lord Shiva, who is believed to have driven out all kinds of misfortunes and calamity.