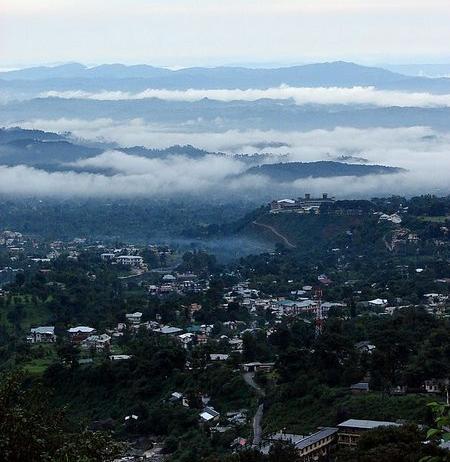 Indeed, a peek into the history of the town reveals many interesting fact. However, let us firs look at its geographical position.

It is important to remember that Kangra is one among the many cities located in the Kangra Valley of Himachal Pradesh. Therefore, when we talk about Kangra Valley, we do not mean just the Kangra town, but a host of other cities like Dharamshala, Macleogunj, Palampur, Dharamshala, Baijnath, Bir and even Sujanpur Tira.

Geologically, the entire area can be classified as strike valley. That means that the valley has been formed parallel to the strike of the underlying rocks. The average elevation of the town is 733 Meters (2404 ft). It is located at the confluence of two perennial rivers called Bener and Majhi. Banganga is another important river which flows by this town. The climatic condition of this region is cold in winter and pleasant in summer. Read more about this, here.

Kangra and its Glorious Past

Kangra has always been politically significant throughout the ages. According to one version, in the days of Mahabharata, the town was named as Trigarta. When the Panadavas of Hastinapur were much feared by the kings all over India, the Kings of Trigarta chose to rise up against them. However, another version identifies it as Bhimagar. According to this version, the city was established by the second Panadava Bhima for his son Ghototkotch.

However, the known records refer to this place as Nagarkot. It also says that the city was the capital of the Katoch Kings, who ruled over the entire area until 1805. The Gorkha invasion, which took place in the beginning of the nineteenth century, saw the end of their rule. After that the town became a part of the Sikh empire set up by Maharaja Ranjit Singhji. In 1846, the area was seized by the British and it became a part of the British Empire. For further reading you may refer to our page on History of Kangra.

As we have already pointed out, Kangra was the administrative headquarters until 1855. Now it is a subdivisional town in Kangra District of Himachal Pradesh. All civic amenities of the town are provided by a Municipal Council, which works in tandem with the district administration. NH 88 and NH 154 are two main roads of this town. Since the town is a favorite tourist spot, many big and small hotels have sprung up across the town.

While tourism is the mainstay of the economy, trade and commerce also plays a significant role.  Kangra tea, cultivated in the valley is internationally famous. Handicraft of this region also contributes significantly to its economy. Kangra clay dolls and miniature painting are famous all over India. Now, different other types of handicrafts are also being developed so as to open more avenues for the artisans of this region.

Some Important Information about Kangra

Follwing are some of the important information about Kangra: